The Pentax K-500 has great ergonomics, and its user interface is easier to use than that of previous entry-level Pentax cameras thanks to the presence of a second control wheel as well as other dediated switches.  We discuss this in more detail below.

The main grip on the right size of the camera is very large, allowing you to hold the camera comfortably and securely.  It matches the shape of your hand well, though not quite as well as the Pentax K-5.  Regardless, you won't find a better grip on any other entry-level camera.

With that said, there are a few issues with the grip.  First of all, users with long fingers may experience a bit of discomfort when half-pressing the shutter release button, due to its close proximity to the end of the grip.  Pressing the green button or the exposure compensation button (directly behind the shutter release button) will also compromise your grip of the camera, as you have to bend your index finger in an awkward manner to reach them.  Simultaneously, your middle finger will not be doing as good of a job of holding onto the camera.  Thus, the positioning of these two buttons could have been a bit better.

Note: the green button is used to reset the exposure to the recommended settings if you have modified the shutter speed or aperture in M or P mode.  It is also used when metering with manual lenses. 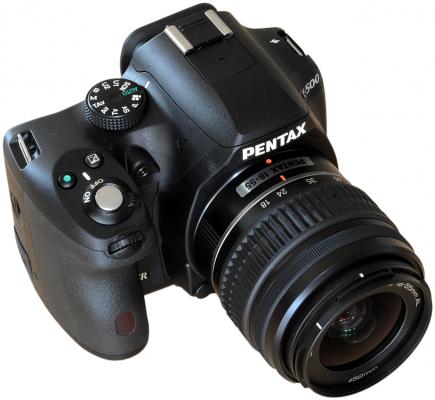 The button layout on the back of the camera is fairly simple; we will describe the user interface in more detail on the next page.  As far as handling goes, though, there's one annoyance that should be pointed out: the positioning of the Live View button.  Like on the K-50 and K-30, the K-500's live view button is isolated to the left of the viewfinder.  This makes it impossible to access during one-handed operation, so if you find yourself in a crowd, you won't be able to switch to live view as quickly as with other cameras.

Secondly, as you can see in the photo below, there's a good amount of button duplication: the 4-way pad also doubles as the gateway for accessing the ISO, flash, drive mode, and white balance menus.  In live view mode, the OK button is used to adjust the autofocus area.  In addition, the rear scroll wheel is used for zooming in playback mode.  While seemingly harmless, this duplication does lead to a slight issue.  When you are shooting with instant review enabled, the rear e-dial will deviate from its assigned function and instead zoom in and out on the displayed image.  This means that if you were using the e-dial to control shutter speed or aperture, you will first need to exit out of the instant review screen manually before going back to shooting.  On the other hand, because there are so few buttons, the interface is a bit faster to use and easier to master than that of other cameras. It should be noted, though, that the zooming of the instant review image can be disabled in the instant review customization menu.

The AF/AE-L button can be programmed to either engage the autofocus (in addition to/in lieu of half-pressing the shutter release button), temporarily disable the autofocus, or enable auto-exposure lock.

The info and menu buttons have context-sensitive functions depending on where you are in the menu.  Icons at the bottom of the screen will inform you of this.

To the left of the LCD, on the side of the camera, you will find a rubber flap covering the K-500's USB port, which allows you to connect the camera to your computer for file transfer and firmware updates. 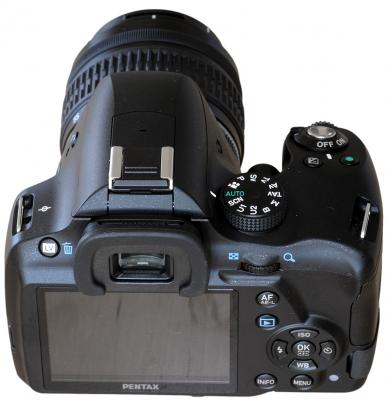 On the front left side of the camera (assuming the lens is facing away from you), like on other higher-end Pentax DSLRs, you will find a customizable "Raw/FX" button as well as a switch that allows you to choose between single autofocus, continuous autofocus, or manual autofocus.  Having the AF switch on the camera body is very convenient, as it saves you a trip to the menu when switching to continuous mode (compared to earlier entry-level DSLRs such as the Pentax K-r).

The Raw/FX button is customizable, and it can be programmed to control any of the following functions with one push:

It is great that Pentax has made it possible for this button to engage the optical preview, as unlike higher-tier Pentax DSLRs, the K-500 does not have a dedicated optical preview switch setting on the on/off switch.

Above the Raw/FX button you will find the flash button, which mechanically releases and pops up the built-in flash when pressed.  Because the flash release lever cannot be electronically controlled by the camera, the flash will never fire unless you pop it up yourself, even when in "auto" mode. 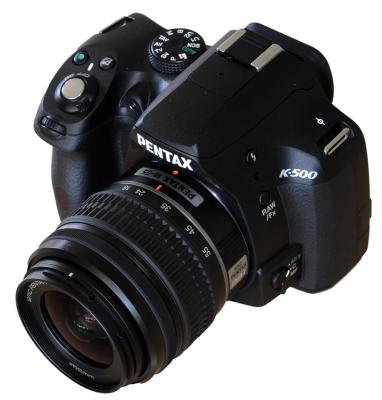 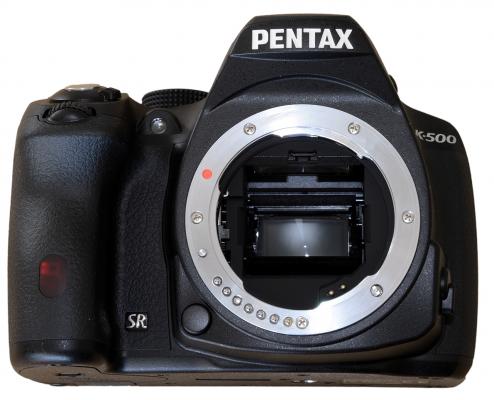 On the side of the grip you will find the SD card door, which retains the "pointy" design of the K-30.  The door feels very sturdy and it is remarkably easy to open with your thumb or index finger (when not holding the camera by the grip).

Below the door is a traditional cable release port.  The flap covering this port is made entirely of rubber, and it considerably more difficult to remove and close.  Be sure to always close this flap proberly in order to avoid dust and dirt buildup.

The camera's speaker, which is positioned directly in front of the mode dial on the side of the viewfinder housing, can be seen in the photo below.  The monoaural microphone is located on top of the camera, in front of the hotshoe. 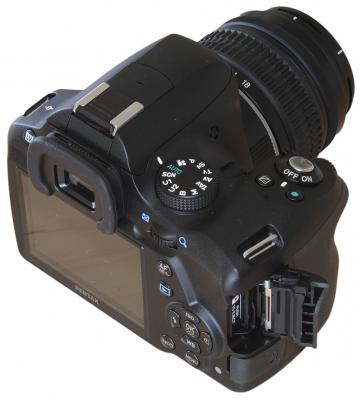 Enlarge the image above for a better view of the microphone and speaker.  Notice also that the camera's diopter can be adjusted using a slim switch surrounded by the (removable) eyecup.

The mode dial is positioned in such a way that it easy to turn with your thumb; it is almost as easy to turn as the control wheel directly below it.  Its studded texture provides plenty of friction, and there is no locaking mechanism for conveinent one-handed operation. 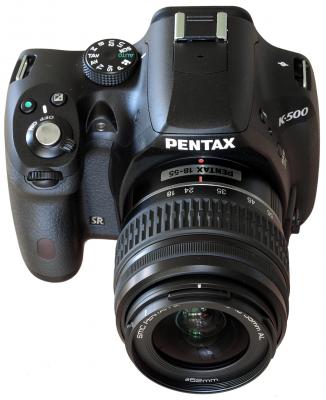 Finally, underneath the camera, you will find the battery door and the tripod mount.  Because the K-500 also supports AA batteries via the optional battery holder accessory, there is quite a bit of empty space inside when the rechargeable battery is used.  Despite this, the battery is still easy to insert.

The K-500 does not support an optional battery grip as the camera lacks a grip connector. 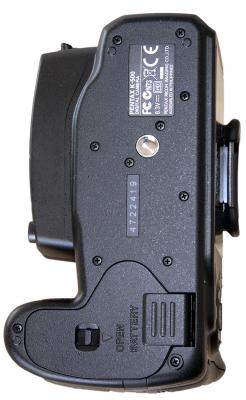 Even though the K-500 is not fully weather-sealed, it seems that Pentax have decided to leave a handful of seals intact around the SD card door, battery door, and USB/cable release connectors.  The photos below confirm that the K-500 is identical to the K-50 in the areas shown (K-500 left, K-50 right):

We found that the K-500 weighs approximately 5 grams less than the K-50, which is consistent with the removal of its internal seals.  The on/off button also moves with slightly less friction on the K-500 than on the K-50.

The Pentax K-500 feels very solid in your hands- just as solid as the K-50, in fact, even though it lacks weather seaing.  This is also despite the fact that the external body itself is made of plastic; underneath the plastic finish there is a metal frame.  The camera's grip and left side is surrounded by faux leather that provides plenty of friction.  The finish isn't quite as fine as that of the K-30, but then again, the material used on the K-500 is also more traditional.

Overall, the Pentax K-500 is very easy to hold and use.  While we find the placement of the live view, exposure compensation, and green buttons to be sub-optimal, we feel that most users will enjoy the button layout and find most functions to be easily-acessible.  The fact that the K-500 has two control wheels and a dedicated autofocus switch will simplify everyday shooting in the field.

There are a few things that we think are missing, namely a rear infrared port, a DC power adapter support, though these aren't major omissions for an entry-level camera.  Because there is no dedicated ISO button, changing the camera's sensitivity requires you to be outside of the menu system; the ISO options will then be displayed on the rear LCD.

The actual user interface will be discussed and evaluated on the next page of our review.  We'll conclude this section by saying that like the K-50 and K-30, the K-500 is a winner in terms of build quality and ergonomics.

There are no additional color options beside black for the K-500.  If you want a colorful DSLR, consider the K-50, which is available in 120 different color combinations including all-red and all-white.