On this page we will give you a detailed overview of the K-500's key selling points, some of which we have already alluded to in the introduction. 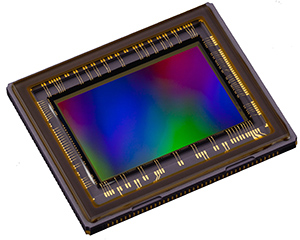 The APS-C-sized sensor in the K-500 will give you plenty of resolution for just about any type of photography.  It features approximately 13 stops of dynamic range, low noise at ISOs up to 3200, and respectable performance up to a maximum sensitivity of 51,200.  You can of course customize the way the K-500 renders JPEG images via the in-camera "Custom Image" menu.  The K-500 is also capable of capturing 12-bit RAW files.

This same sensor (with minor adaptations) has can also be found in earlier DSLR models, including the K-5 and K-30 from Pentax and the D5100 and D7000 from Nikon.  All four of these cameras have received praise for their exceptional image quality, so we expect the K-500 to do the same. 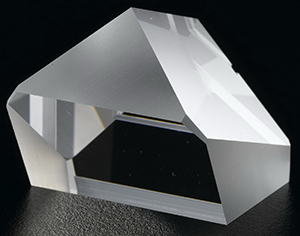 The K-500 features a bright pentaprism viewfinder with 100% frame coverage and 0.92x magnification.  This means that everything you see through the viewfinder will be portrayed in the final photograph, and nothing more.

Comparable DSLRs from other manufacturers, such as the Nikon D5200, use cheaper pentamirror viewfinders and do not cover the entire frame.  For example, the D5200 only offers 95% frame coverage and 0.78x magnification, meaning that the viewfinder itself is smaller.  The pentamirror design also darkens the viewfinder.

Thus, the K-500 has one of the best viewfinders in its class. 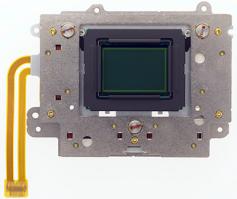 have opted for in-camera shake reduction (SR) rather than in-lens stabilization.  The advantage of this system is that it can be used to stabilize just about any lens, even if it's fully manual.

In addition to stabilizing stills, the shake reduction mechanism can be used to shift the sensor, allowing you to use any lens as if it were a shift lens.  This allows you to correct perspective distortion or increase the effective field of view of your lens, as we describe in this tutorial.

When used with manual lenses, the camera will prompt you for the current focal length so that it knowns how much compensation to apply. 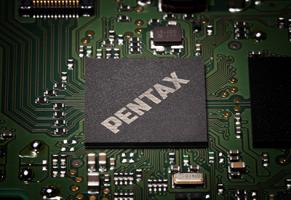 The PRIME M (Pentax Real Image Engine) processor that's found is the K-500 is the latest-generation chip from Pentax.  Even though it's not quite as speedy as processors in Canon or Nikon DSLRs, it delivers a significant performance improvement during image playback, video recording, and live-view compared to earlier Pentax models (before the K-30/K-01).  With this processor, it is possible to shoot videos at up to 60 frames per second in 720p, or 30 frames per second in full HD.

This processor also enables focus peaking in live view in addition to an enhanced contrast-detect autofocus system for live view and video. 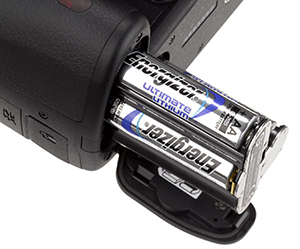 The K-500's battery compartment employs a hybrid design that lets you use either the included rechargeable battery or a set of four standard AA batteries to power the camera.

The D-BH109 battery holder accessory is included with the K-500; a dedicated lithium-ion battery and charger may be purchased separately.

Since there is no dedicated battery grip for the K-500, you cannot use a grip as a secondary power source.  The AA battery holder makes up for this by allowing you to easily replace the batteries in the field in places that don't have power.

Note: the Pentax K-50, K-30 and K-r are also compatible with the same battery holder accessory. 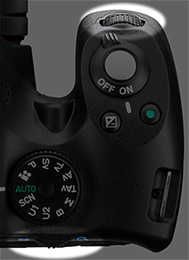 The K-500 features two control wheels- one at the front of the grip, for your index finger, and one on the back of the camera, for your thumb. This design allows you to easily adjust the shutter speed at the same time as the aperture; further in-menu customization allows you to assign other functions to the second wheel in modes such as shutter priority or aperture priority.

While in P (Program) mode, both wheels can be used to engage Pentax's unique Hyper Program mode, which allows you to manually select either the shutter speed or the aperture without having to change modes via the mode dial.

Like the weather sealing and pentaprism viewfinder, dual control wheels are typically only found on more advanced cameras.

The K-500 is backwards-compatible with every Pentax K-mount lens ever made, as well as with thousands of third-party lenses for Pentax.  It will autofocus with old autofocus lenses and auto-meter with old A-series lenses without any limitations.  It also supports fully manual lenses (no adapter necessary) and M42 lenses (via a small adapter), for which stop-down metering must be used (instructions here).

Thus, if you're on a budget, you'll be able to easily acquire lenses that work with your K-500 without having to spend too much.  All current and legacy Pentax lenses are listed in our lens database.

When used with modern lenses, the K-500 will support the lates features, such as silent autofocusing or in-camera distortion correction.

The K-500 is a unique camera in many ways, as it includes features typically reserved for top-tier cameras.  Many users will find these features quite handy, and perhaps even valuable enough to opt for the Pentax over competing cameras.  That's not to say, however, that the K-500 is hands-down better than what the competition has to offer, so please read on for a full evaluation of the camera.

Compared to other cameras in its price class, the K-500 doesn't lack much.  The only big feature that's missing is an external microphone jack and an HDMI port.