The K-500's Movie mode is pretty much a direct copy of the one found in the K-30 and K-01.  It still offers a number of improvements over Pentax's flagship DSLR, the K-5 II. Namely, it provides a much more comprehensive set of FPS options at both full 1080p resolution and 720p. It also supports some manual control during video recording, which the K-5 did not. Finally, it allows for on-demand autofocus (non-continuous) during recording. 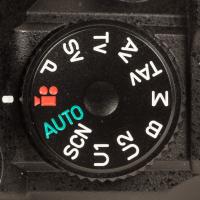 Just like the K-30, K-01, and K-5, the K-500 is capable of making basic in-camera video edits, including splitting and trimming, as well as exporting frames as JPEGs. To trim movies, the user can press the down button when the video is selected (but not playing) in Playback mode. To extract a JPEG frame from the video stream, you need to play the video, pause it, and then press the EV compensation button, which will bring up a Save Image dialog.

The K-500 features three movie shooting modes: P, Av, and M. You can select the mode via the main menu or, more conveniently, through the INFO screen. In P mode, the camera sets the shutter speed, aperture, and ISO for you, but you can adjust the exposure by up to two stops using EV compensation. In Av mode, the camera sets the shutter speed and ISO, while you choose the aperture and can also adjust the EV. If you choose an aperture setting that's too slow for the current lighting conditions, the aperture number will light up in red on the LCD. 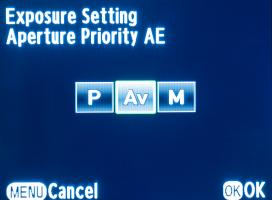 In M mode, you control the shutter speed and aperture, and the settings will flash in red on the screen if you're under- or overexposing. You can also choose to manually control the ISO or leave it in auto-ISO mode. Note that if you set the ISO to auto before you begin shooting, you will not be able to change it during recording. Since the K-500 has dual e-dials, you can control aperture and shutter speed at the same time. The shutter speed can be changed during recording, but the aperture setting cannot be changed once recording has begun. You can also select custom image settings and digital filters from the INFO menu before recording begins. 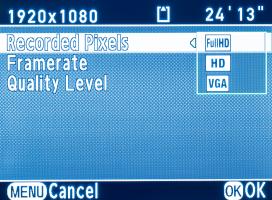 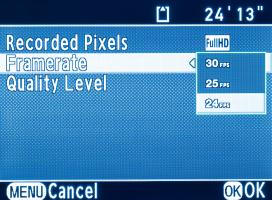 Like the K-30 and K-50, the K-500 also includes an "Interval Movie" mode that works similarly to interval stills shooting, but combines all the stills into a time-lapse movie file.

The K-500 has a built-in monaural microphone like the K-30, but unlike the K-5 II, K-5, and K-01, which all offered stereo mics. Also like the K-30, it does not include an input jack for external microphones. The microphone recording level can be set in five increments through the INFO menu or the Movie section of the main menu. It can also be adjusted during recording.

Autofocus can be used before and during recording. However, the feature that a lot of users are looking for—continuous AF during recording—is not available here. While recording, you can press the AF/AE-L button to force the camera to refocus, but once it locks onto a target it stops and you have to press it again to refocus a second time, etc. This is the same regardless of which Contrast AF mode you've selected, Face Detection and Tracking included. 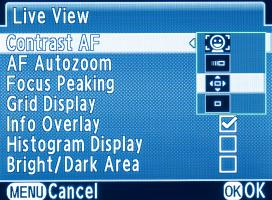 On the whole, AF is nothing to write home about; we strong recommend pulling your own focus at all times. Autofocus during recording is slow, noisy, and jittery. SDM and DC lenses (those with built-in focusing motors) make less noise, but it's still plenty audible if you use the onboard mic.

Shake reduction works quite well during video recording, and is virtually silent. We've found that the SR system makes panning without a tripod much more stable, which many users will definitely appreciate.

Like the Pentax K-50, K-30, and K-01, the K-500 possesses very good video capabilities, even though it seems that Pentax's technology has stood still since the launch of the K-30. The PRIME M processor still opens up plenty of framerate possibilities, which we know the videographers among us will appreciate. All the camera's movie settings are quite easy to access thanks to the INFO screen. Just as they do when shooting stills, the auto-exposure and custom image settings work perfectly in video mode.

However, there are a few software-related things that bug us about the K-500's movie mode. First, focus peaking is not available while a video is being recorded. It's there when you're framing your shot before you start recording, but the moment you hit the shutter release to start the camera rolling, it goes away. We can only assume this has to do with a lack of available processing power; otherwise its omission makes no sense whatsoever.  This issue also existed in the K-30, and Pentax seems not to have corrected it. Next, it's a little bothersome that the aperture setting can't be changed while recording, even in Av mode. We realize that doing so will cause a sudden change in exposure, but why not give the user the option? Third, there's still a decent amount of rolling shutter (jellyvision) present in clips, particularly those shot in low light. We understand that this is a fact of life with CMOS sensors, but it never fails to annoy.

All of our other complaints about movie mode on the K-50 are hardware-related. Only a monaural onboard mic, no external mic jack, no HDMI, and no articulating screen. As usual on a DSLR, the movie mode here, how ever advanced it might be, is secondary to the stills shooting experience. (And rightly so in our opinion, but these omissions will irk the more video-inclined among us.)