For most of the digital era, Pentax has maintained several distinct DSLR lines. At the top has been the line currently represented by the K-3 II—the prosumer line, offering the robust handling and powerful feature set of leading full-frame cameras, but built around an APS-C sensor. The line that’s now represented by the K-S1 is designed for entry-level users, with simpler construction and a reduced feature set. And then there’s the middle ground, home to cameras like the K-50, K-S2, and now the K-70.

The Pentax K-70 is neither a pro body nor a beginner’s camera, though it could serve either group with aplomb. Instead of targeting one group or the other, it splits the difference with a 24-megapixel APS-C sensor, plenty of features cribbed from the K-3 II and K-1, and a robust, water-resistant design. This is a camera for enthusiasts who don’t need all the bells and whistles of a flagship camera, but want the versatility those cameras promise.

There are other perks in this midrange conconction, too. In addition to de rigeur features like dual control wheels and a high-res articulating screen, the K-70 gets the K-1's pixel-shift super-resolution mode (complete with motion correction), 14-bit RAW capture, and (in a first for Pentax) on-sensor phase detection autofocus pixels for continuous focus during video recording.

At $649 body-only, the K-70 is the latest in a long line of value-oriented Pentax cameras, which have consistently undercut more expensive competitors from Canon and Nikon with both features and price. But that said, does it also undercut Pentax’s own K-3 II? And can its improved autofocus system make it a true alternative to the Rebels of the world, or does Pentax still lag behind when it comes to video?

Read on to see how the Pentax K-70 fared in our tests! 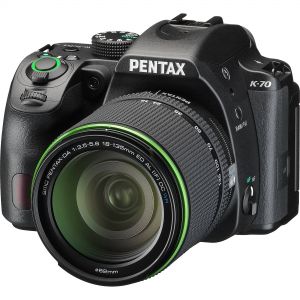