Originally announced at the CP+ trade show in early 2013, the Pentax WG-3 and WG-3 GPS represent the latest (fifteenth) generation of Pentax's durable waterproof digital cameras, replacing the Optio WG-2 and WG-2 GPS compacts from the previous year.  The WG-3 improves on its predecessor in many areas; the most notable changes include: 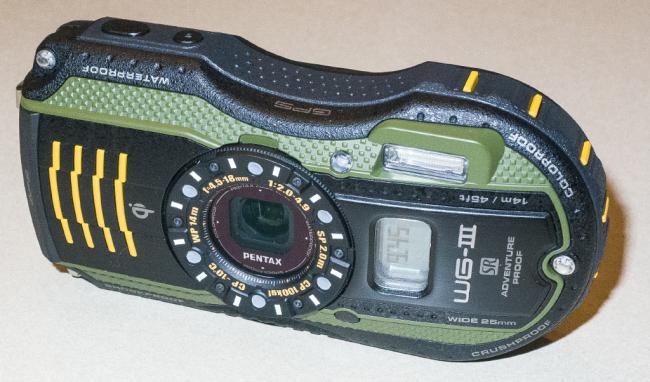 The WG-3 is designed to be the ultimate outdoor camera.  Thanks to its durable design, dirt, falls, and even water shoulnd't be able to damage it.  You can use it to take pictures while swimming, hiking, kayaking, rock climbing, and much more!  Take it where your normal camera or cell phone cannot go.

If you're looking for a good camera for underwater and outdoor photography, the WG-3 may be right for you. 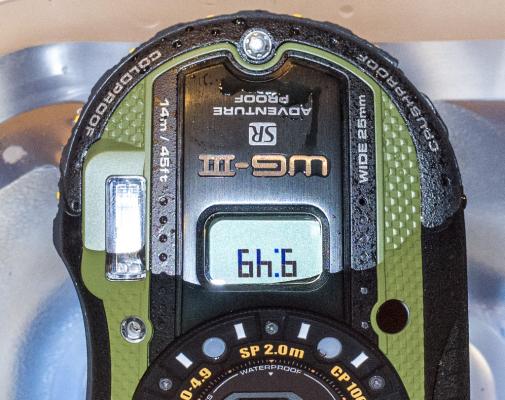 Just like its predecessor, the WG-3 is available in two versions: one with built-in GPS, and one without.  However, Pentax has decided to further enhance the WG-3 GPS by adding four extra features not found on the conventional model: wireless recharging (via the Qi standard), an electronic compass mode, a barometer, and a front LCD capable of showing the time, relative elevation, or current air pressure.  Despite these and other improvements, the WG-3 was launched at a lower price than its predecessor: the conventional WG-3 is available for just $299, while the WG-3 GPS costs an extra $50 and is priced at $349.  The price difference between the GPS version and the conventional model remains unchanged.

The WG-3 is available in a total of four different and that differ from those of the WG-2.  The conventional WG-3 comes in orange and gray, while the GPS version comes in green and purple.  Notice that the conventional version lacks the front LCD:

Update: in June, 2013, Pentax announced that the WG-3 (without GPS) would also be made available in white, bringing the total number of color options up to 5.

With the WG-3, Pentax is dropping the "Optio" brand name typically given to their compact cameras.

In this review, we will take an in-depth look at the WG-3 GPS's performance and image quality.  This camera looks great on paper, but does it work equally well in the field?  How rugged is it really?  Read on to find out!

We will be using a production WG-3 GPS (in green) for the purposes of this review.  Since the conventional WG-3 shares the same hardware as the WG-3 GPS, we will be making conclusions about both cameras.  There is no difference in image quality or waterproofing between the two variants.

Ready to get your Pentax WG-3 GPS? Click below to place an order or check current pricing. 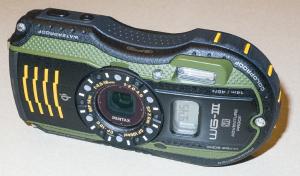