Note that most of this section was written when using the camera with firmware 1.10, which according to Ricoh includes many AF improvements, especially in low light. for further discussion about firmware versions, see the Interface and performances section. 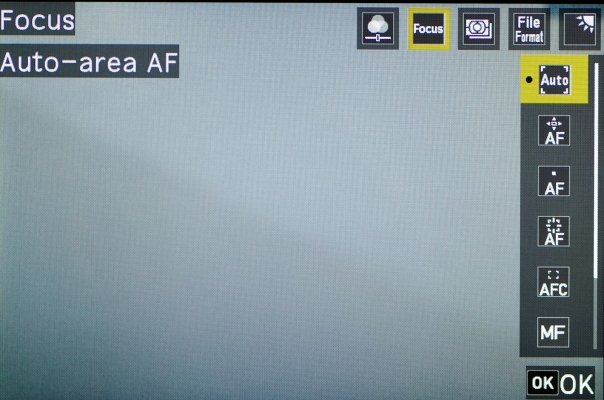 The Ricoh GR III offers an impressive number of focus options, which are summarized in the following table.

The first is Face Detection, which can either be turned on (works in Auto-area, Select or Pinpoint modes), off, of can be set to activate only when auto-area AF is active. In practice, we have found Face Detection to work as expected, detecting faces reliably in the vast majority of cases. We like that the camera reverts to the selected AF mode automatically if no faces are detected.

Second, the AF-assist light can be turned on or off. Focus peaking, a feature known to Pentax DSLR users, now includes the “Extract edges” in addition to the “Highlight edges” which is more commonly known. It can also be turned off. AF-C can also be set to either focus or FPS (frames per second) priority.

Selecting the focus point in Select, Pinpoint, Tracking or Continuous AF modes is done by pressing the OK button to toggle between the four-way controller’s shortcuts and AF point selection. A press-and-hold on the OK button returns the AF point to the center (mimicking the green button’s operation on a Pentax DSLR).

One nifty option is Snap Focus. Quite simply, this function is a preset focus distance setting. It can be set at any of 6 different values. Sadly, the user cannot use values in-between those pre-programmed in the camera.

The most useful feature of Snap Focus is that it can activate when the user presses the shutter button fully (foregoing the ubiquitous half-press). The behavior can be turned on or off at will. Having the option to use the AF system normally via a half-press, and to use Snap Focus without going into menus, is extremely useful.

Available in any AF mode, touch focus overrides the selected behavior and focuses where the users touches the LCD screen. It is, in essence, another way to use the Select AF mode. The camera offers three options:

In use, we have found that the latter is the most convenient mode, as moving the hands around runs the risk of moving the camera. This is particularly true in macro mode.

Touch focus has been very reliable during our tests. The AF “box” is roughly the size of a finger, regardless of the AF mode used, so there is no accuracy loss associated with this feature. Having access to the LCD to select the AF area is a novelty for Pentax/Ricoh users; it is a welcome new feature that we would like to see appear on future DSLRs.

Selecting Manual focus brings up a scale on the left side of the screen. The rear e-dial or the up-down arrows can then be used to select the focus distance. The level of accuracy is interesting, with very small increments allowed.

The camera can magnify the focus point automatically to make MF easier.

Accessing manual focus is relatively easy, particularly if Focus is one of the settings available via the ADJ lever. However, actually changing the focus distance is a bit convoluted. It requires the user to press the Up arrow, and then rotate the rear e-dial to change the focus distance. The first of these two steps seems unnecessary.

While not a “true” macro mode (with 1:1 enlargement), the GR III does offer a close-up mode. The mode lets the user focus at distances between 6 and 12cm from the edge of the lens.

Touch Focus is available in macro as with regular focus.

When using manual focus, the macro shortcut is disabled. In that case, the Focus menu can be used to access the macro mode.

AF speed is strongly dependent on the shooting conditions. To set a comparison point, we have performed the exact same test that we use in our lens reviews.

The subject was a black cross on a white background, about 1.5 meters in front of the camera. We tested Auto-area AF and Pinpoint AF. We set the lens at infinity before each test, and three measurements were averaged for each data point. Measurements were performed by recording the AF noise, at various levels of ambient light.

Ricoh released a firmware update on April 24th; we compare AF speed with both firmware versions. 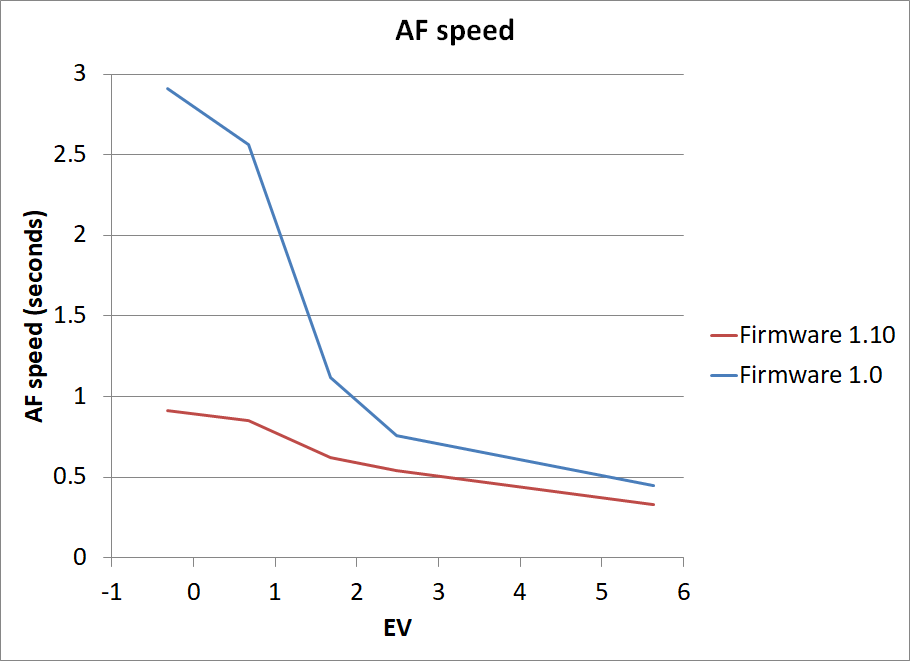 Note that 5 EV corresponds roughly to a small room lit with a 60 W bulb, and a sunny day corresponds to 16 EV, and a moonlit night to -2 EV.

The first observation is obvious: the new firmware offers striking improvements regarding AF speed. The difference is particularly visible in low light, where the older firmware was also less repeatable. Differences decrease when light levels increase.

With firmware 1.10, even in very low light, the GR III offers acceptable speeds: below 1 second. The consistency and accuracy were also up to par. The AF speed increases dramatically as the scene gets brighter; above 5 EV it almost reaches 0.3 seconds, an impressive feat. It is rare to see DSLR lenses reach this speed.

Prior to firmware update 1.10, the camera could, at times, hunt for no particular reason, in conditions where we wouldn’t expect a modern camera to struggle (and in contrast to what we experienced with the original GR).

In this regard, firmware 1.10 is a godsend. Even with light levels as low as -0.32 EV, the camera’s AF is not only fast enough, but more importantly reliable. Even with low-contrast subjects, such as the fake wood on the following image, the AF locked properly under one second. 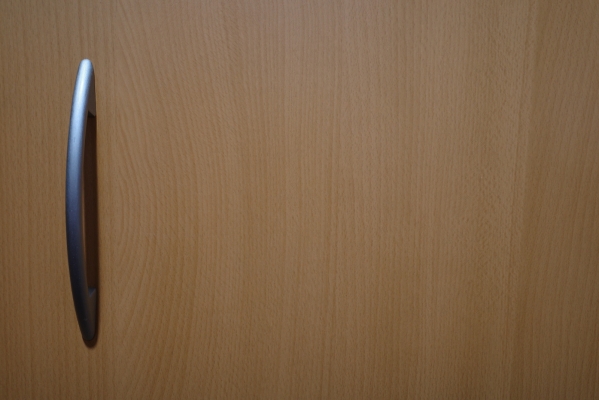 With firmware 1.10, the Ricoh GR III has become a trustworthy autofocus camera. Speeds are acceptable in low light, and impressive in good lighting conditions. More importantly, the AF system has become more decisive and reliable, with much fewer occurrences of hunting. It is good to see Ricoh work to improve their camera.