In simple terms, vignetting is the darkening of the corners of an image that occurs at wider apertures. Every lens, wide open, will exhibit some. Most of the time, it need not be a problem for modern photographers. First, it is always possible to shoot at smaller apertures, mitigating the effect. Second, cameras released in the last few years often have built-in tools to remove vignetting in a way that's invisible to the user. Advanced software also often incorporates lens profiles which can seamlessly correct vignetting.

A fast lens is somewhat more likely to show vignetting than a slow one, although this is not a hard rule.

This section presents how the GR III performs in regards to vignetting. The camera offers a built-in option to automatically correct vignetting. Since the camera and lens cannot be separated, this tool is extremely well-matched to the lens.

The following chart summarizes the findings. 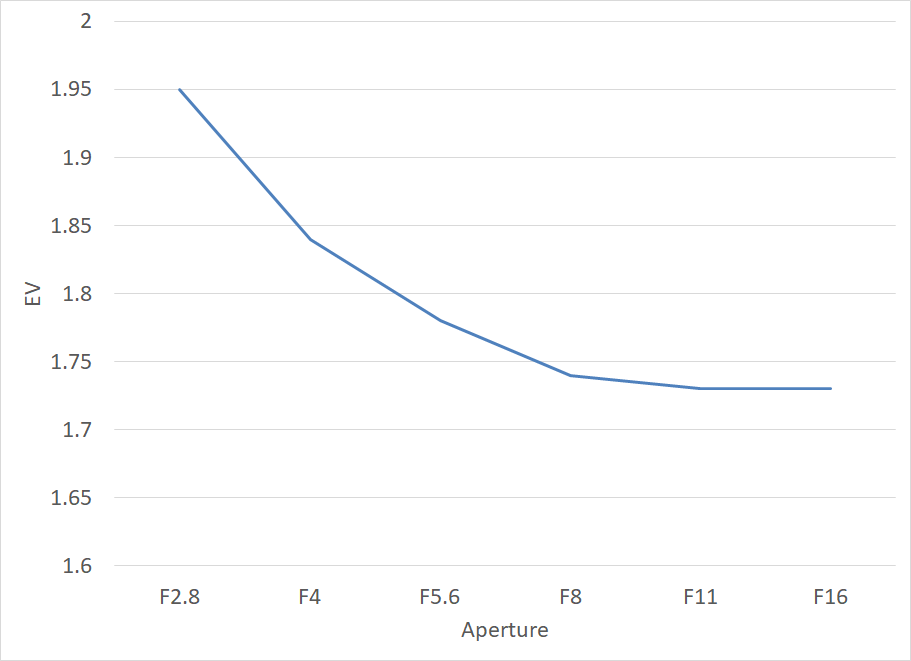 These results show that the designer of the GR III's lens rely on the built-in correction to take care of vignetting. Left uncorrected, vignetting is high at all aperture settings. It is marginally worse wide open, but the difference isn't important. Vignetting until F8 where it stabilizes at roughly 1.72 EV, a huge number if left uncorrected.

We recommend leaving vignetting correction active at all times except for creative purposes.

Vignetting figures are unimpressive when left uncorrected. It is obvious that the designers did not put much effort in controlling vignetting. Luckily the built-in correction tool is robust and reliable.