The Ricoh Theta is a very special and innovative type of camera: at the mere press of a button, it can capture 360-degree spherical photos of your entire surroundings.  Those images can then be viewed interactively on a smartphone/PC, saved as traditional files, and even cropped or enlarged.  No other consumer device on the market can capture everything around you so quickly and easily! 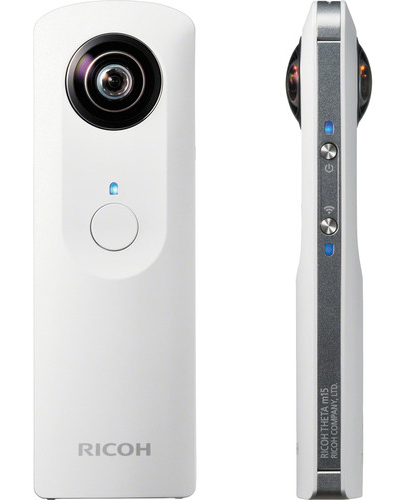 We got an early glimpse of the Theta at Photokina 2012, where a dumbbell-shaped prototype was on display alongside a host of spherical sample photos.  The first Theta model was officially launched in late 2013, and its commercial incarnation proved to be much smaller than the prototype.  In fact, it weighed under 100g and could easily fit in your pocket.

In September of 2014, Ricoh Imaging announced an updated model: the Ricoh Theta m15, the subject of this review. This second-generation Theta introduced 360-degree video recording, a feature arguably even more impressive than the ability to shoot spherical stills.  Three new color choices were also launched. 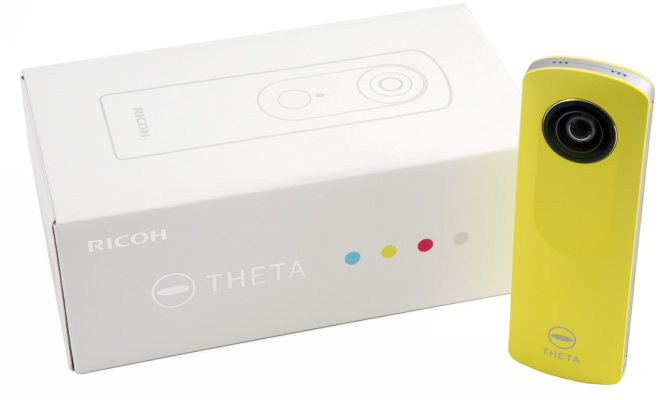 In the US, with a sticker price of $299, the Theta m15 is $100 cheaper than its predecessor.  On top of this, it can be purchased via authorized Pentax retailers whereas the original model was exclusively sold online via Amazon and the Pentax Web Store.  We therefore decided to give this camera a closer look, and we liked it immediately.

The wonderful thing about this camera is that it completely changes the way you look at photography.  The traditional approach of framing and focusing is no more.  Instead, the Theta is all about being in the right place at the right time.  Even in the hands of a seasoned photographer, the Theta feels like something entirely new and different, and it's fascinating!

We can't deny that the Theta is as much a camera as it is a gadget.  With built-in Wi-Fi, a dedicated smartphone app, and social sharing features, it's bound to attract casual users as well as those in love with "selfies", and for good reason.  But there's more to it than that, and we think you might even find room for the Theta alongside your main camera.

Read on to learn all about the Ricoh Theta m15.

Ready to get your Ricoh Theta m15? Click below to place an order or check current pricing.