While 14.5 MP is a more than respectable resolution on paper, one cannot compare this to an ordinary 14 MP camera, since the 14.5 MP of the Theta S must cover an entire sphere whereas a traditional camera only covers a small rectangular portion of an imaginary sphere. What we can do is compare the Theta S to the m15 so as so see how much of an improvement the Theta S represents.

Note that the Theta's output files are already subject to a good deal of internal processing/stitching.  Each lens uses a 12-megapixel sensor and covers slightly more than 180 degrees.

The out-of-camera JPEG for the scene we're using for the comparison looks like this when viewed in an ordinary image viewer. We have indicated the crop which we will be analyzing. The image below has been resized, but not cropped: 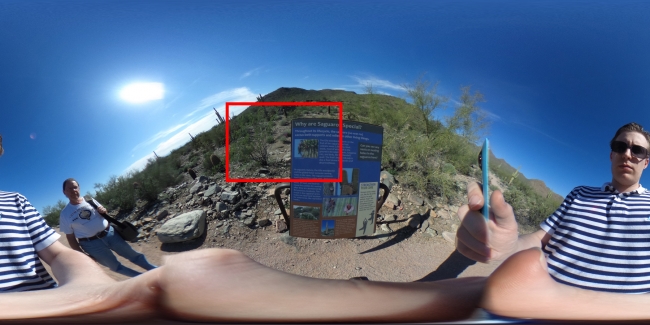 As you can see the same scene was shot at the same time with the m15 (in the photographer's right hand).

Before we proceed with the comparison we will show how the forward-facing part of the image looks like when viewed by the Ricoh Theta spherical image viewer in full screen mode on our 1440 x 2560 pixel monitor (click to enlarge and browse): 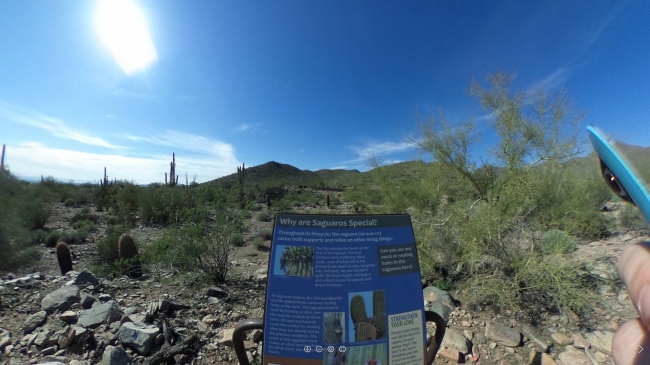 The Theta S image is crisp and contrasty

Zooming into the image with the Theta app allows us to read the sign: 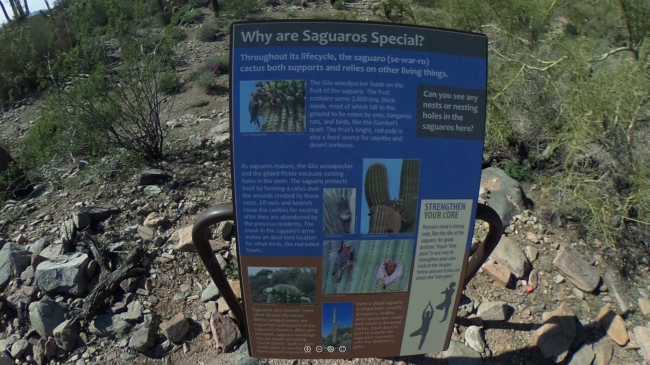 Again, this is a screen shot of the Ricoh Theta app in full screen mode

Now for the comparison between the Theta S and m15 of the crop outlined at the top of the page. The comparison is based on images right out of the cameras (the spherical viewer is thus not involved). The Theta S crop was reduced in resolution so as to match the Theta m15 image. 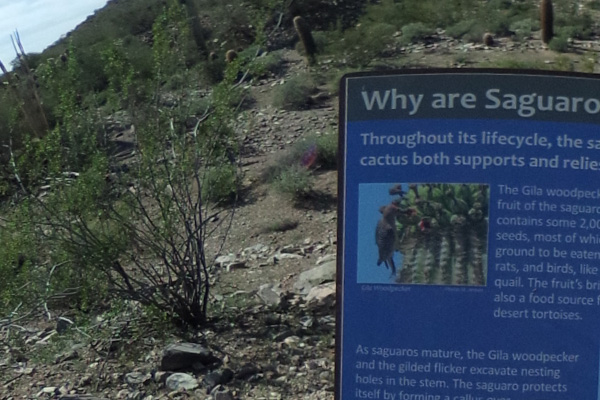 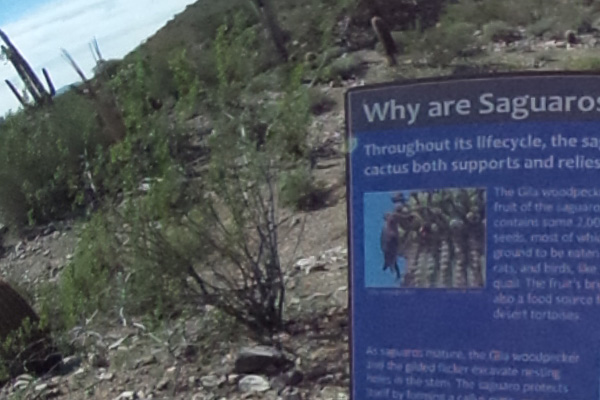 The Theta S image is much sharper and has better contrast. This is particularly important when using the Theta spherical viewer since it allows for zooming much further into the image before details begin to get patchy.

If you'd like a closer look we have provided links to the original files used for the above comparison:

Sharpness drops considerably in areas where the image is rendered by the edges of the lenses, i.e. where the two hemispherical images are stitched together. The stitching itself is generally not noticeable, as the camera software does an excellent job of stitching. In the panoramic crop below C marks the areas captured with the center of the lenses whereas E marks the areas captured with the edges:

The following table shows 100% crops taken from the center and edge areas of the image above. Click a thumbnail to enlarge and browse.

The big difference between center and edge is disappointing. It is advisable to shoot with the main subject directly in front of or behind the camera (as one would do with an ordinary camera).

If the sun is up chances are that it will be in your picture unless you shoot from the shade of a cactus, say. In our experience you will almost always find a ghost in the form of a red spot somewhere in the image (A). The spot can be removed with an image editor, but it is an annoyance anyway. In some cases we also saw some flare (B), but flare is surprisingly well controlled for a 360 degree pair of lenses. We have never noticed the nasty red spot in images from the Theta m15. Instead the m15 is more prone to flare than the S. 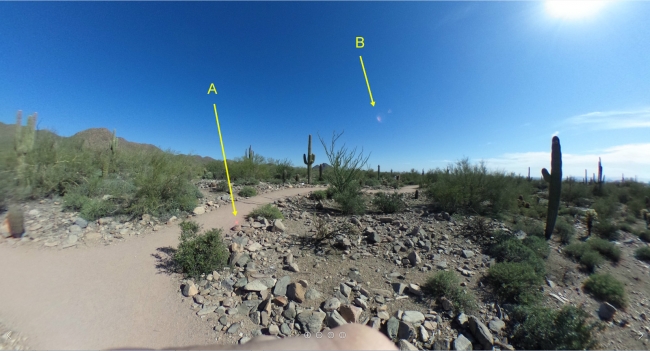 This close up shot illustrates how the Theta always turns the image so that it is right side up. For this shot the camera was held horizontally, nevertheless the image is positioned correctly. It is a crop from a screenshot from the Theta spherical image viewer, but the image out of camera is also turned to render "up" up. This correction is also enabled for movie recording. 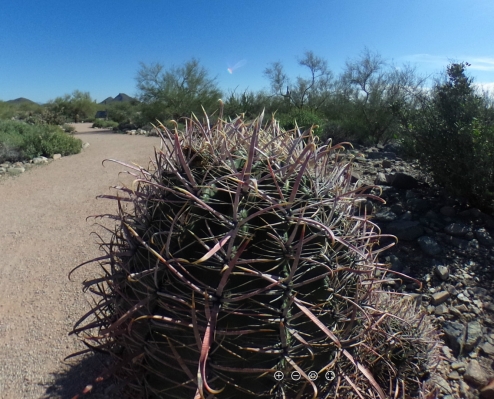 The Theta's fixed focus lens renders subjects in focus from as close as 10 cm. In no way is it a macro lens, but it can be used for close-ups if you don't mind the vast depth of field and some significant perspective distortion.

The Theta S does better than previous models in low light, mainly thanks to its increased sensor resolution.  However, detail quickly gets smudged at the maximum ISO setting. 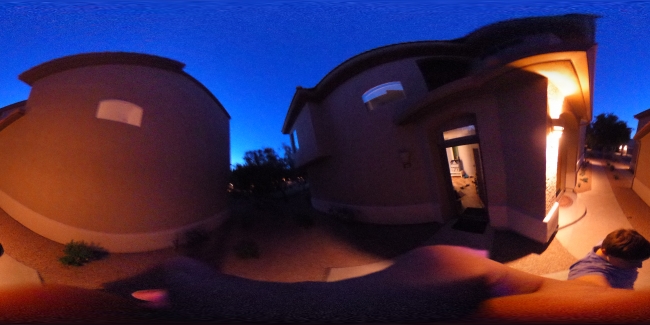 The Theta is great for documenting events and such. It is unobtrusive and easy to use in its basic mode.

Here are some examples shot at the WPPI trade show in Las Vegas in February of 2016. The first example is presented as two screen shots of the RICOH Theta PC app, the second example is a crop from the file as produced by the camera. In this kind of shots one doesn't notice the lower resolution at the edges of the image circle. That's primarily an issue for landscape photos. 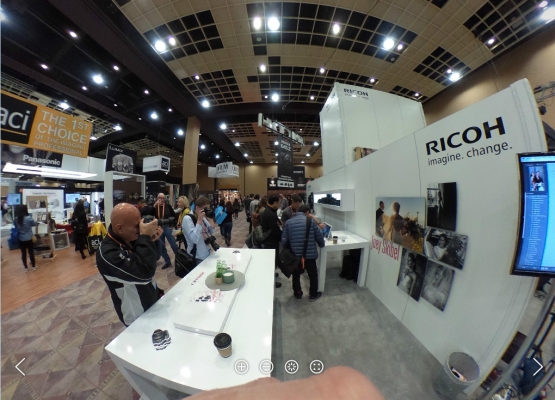 The scene in front of the camera 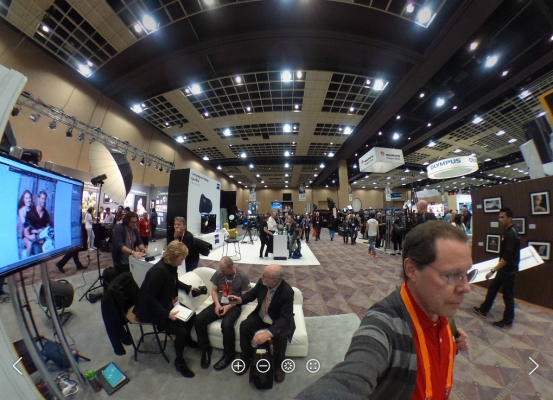 The scene behind the camera 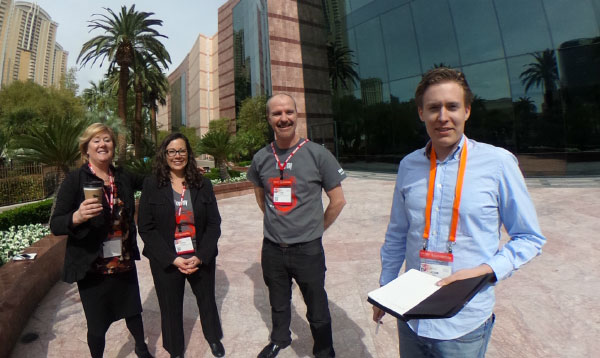 When it comes to summing up the Theta S's image quality, we generally look past traditional criteria, and even some of the tests presented on this page.  The bottom line is that the Theta S produces very detailed images which are sharp and have accurate colors when shot in typical, decently-lit scenarios.  The camera does a great job at what it's designed for: capturing everything around you at nothing more than a push of a button!

Ready to get your Ricoh Theta S? Click below to place an order or check current pricing. 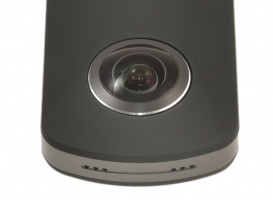