The Ricoh WG-30w is a rugged, waterproof, coldproof, and shockproof digital camera launched by Ricoh Imaging in late 2014; as part of the WG series, this compact has been designed specifically for the active outdoorsman.  It is the first WG model to include built-in Wi-Fi, certainly a long-overdue feature relative to the competition.  The wireless connectivity allows you to not only browse and download photos, but also to control the camera remotely and capture images using just about any Wi-Fi enabled device with a modern web browser, such as a smartphone, tablet, or PC.

To put the WG-30w through its paces, we tested it in its natural domain: snowy weather with temperatures just below freezing. 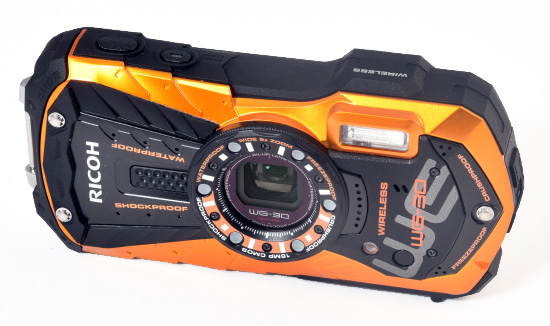 If you've previously been in the market for a waterproof compact, this camera may seem familiar. That's because the Ricoh WG-30w is essentially a re-spin of the Pentax Optio WG-2 which was launched back in early 2012.  Pentax's WG lineup has evolved over the course of many years (company/branding).  The first fifteen generations of waterproof cameras were sold under the Pentax brand, but following Ricoh's acquisition of Pentax Imaging, the company decided to continue the WG series under the Ricoh name.  Despite different branding, the WG-30w is identical to the WG-2 from a hardware perspective, with the exception of the wireless functionality and LCD screen.  Still, we believe that the WG-30w's wireless functionality alone warrants a closer look, and thus we're happy to present you with our complete in-depth review of this tough little camera.

Read on to learn more about the WG-30w!

Ready to get your Ricoh WG-30w? Click below to place an order or check current pricing. 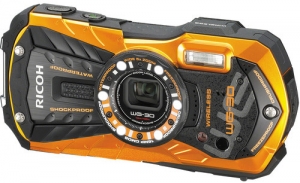