The Sigma 30mm "Art" incorporates a silent in-lens HSM autofocus system which is compatible with all Pentax DSLRs since 2006.  Sigma's HSM has been known for its reliability, a good thing for users that are planning to make this lens a long-term investment.

The AF system in this lens is virtually inaudible, and all focusing is internal, meaning that the barrel of the lens does not extend.  Refer to the video below to see it in action:

As we mentioned earlier, this lens supports full-time manual focus adjustments without the need to switch to manual focus mode.  This is a very handy feature, and one we've grown used to seeing on premium lenses.  In addition, to make the lens easier to hold and to speed up the focusing performance, the focusing ring does not move while the lens motor is active, as you can see in the video. 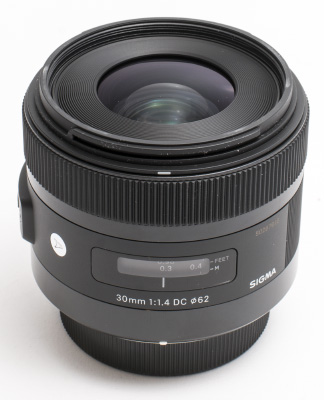 Before we move on, we unfortunately have to report some bad news about the autofocus performance of this lens.  While using it in the field, in the studio, and in outdoor tests, the lens did not consistently deliver reliable results.  Both through the viewfinder and in live view, the camera would often focus slowly or simply fail to focus correctly, attempting to make micro-adjustments than would normally be necessary.  The overall AF speed is also not stellar.  The performance worsened at close focusing distances, which while shooting often gave us the impression that the lens was at its minimum focusing distance even when was not.  This erratic performance gave us considerable trouble with hand-held close-ups and resulted in a number of out-of-focus photos, also including landscapes.  To confirm these findings, we verified that front/back focus was not an issue and then tested the lens on the Pentax K-50 and K-5 IIs in addition to our primary test body, the K-3.

We had no such issues with the Sigma 35mm F1.4 "Art", which leaves us with two possible explanations for the 30mm's poor performance: either the lens's low contrast at F1.4 has a negative impact on the camera's autofocus system, or Sigma's adaptation of HSM for Pentax is flawed in this particular lens.  We suspect that the latter is more likely, as reviews of the Canon and Nikon versions of this lens have been favorable. Thus, a lens firmware update might solve the AF problem in the future.  We will report on this should we learn more.

Some of our forum members have reported compatibility issues between certain Sigma HSM lenses and Pentax DSLRs, citing incompatibilites in the lens firmware and issues when using teleconverters.  We tested the 30mm lens with the Pentax 1.4x teleconverter, and it was unable to lock focus on the K-3 in daylight, though it did "hunt" while attempting to do so.  This further supports the second theory proposed above.  We received no resonse from Sigma when we inquired about whether there were any known compatibility issues in the Pentax version of the 30mm.

At the end of the day, it is certainly possible to get the Sigma 30mm to focus accurately, but sometimes multiple attempts are necessary.  At other times, the lens get close to the optimal focus point but fails to lock on.  This slowed us down while shooting close-ups at wide aperture settings.  The AF performance was the most problematic when the subject is less than a meter away from the camera.

Ready to get your Sigma 30mm F1.4 DC HSM "Art"? Click below to place an order or check current pricing. 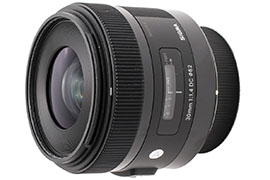