Who is This Lens For

Contrary to popular belief, this lens isn't a consumer zoom like the 18-55mm WR, 50-200mm WR, or 55-300mm. Rather, it is a higher-quality "prosumer" lens aimed at serious amateurs and those willing to spend the extra buck for a higher-quality lens that still brings with it the convenience of a long zoom range. Those that have bought the K-5 will find this lens particularly attractive, provided that the high pricetag of $529 doesn't scare them away!

This lens does have the typical F3.5-5.6 maximum aperture range, which isn't anything out of the ordinary, but can easily be made up for through the K-5's impressive high-ISO performance. The build quality of this lens is very solid- it is easy to hold, compact when zoomed all the way out, and features quick-shift manual focusing as well as internal focusing. Its barrel is made of plastic (no metal components like in DA* lenses), but is nevertheless quite sturdy. It's fairly dense and thus not light as a feather, but not heavy enough to tire your hand during extended use. It does not feel flimsy whatsoever when focusing or zooming, although the lens does not zoom internally.

Its zoom throw its about 90 degrees, and the lens extends to about twice its original length when zoomed all the way to 135mm. Its focusing throw is about 120 degrees, which isn't really shorter than that of other lenses; this shows that the new DC motor is simply fast! 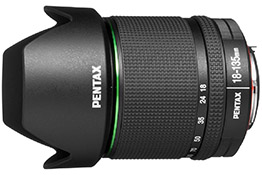