The image quality for this lens is pretty darn good considering its low cost and wide range. While it is not as sharp as a prime, or a zoom like the DA 16-45mm f/4 ED, it still has its sharpness sweet spots, like around 100mm and close up. It also produces smooth and creamy Bokeh, handles chromatic aberration well and has good color reproduction.

This lens is only sharp at smaller apertures, and the 50mm area should be really covered by other lenses, as the DA 50-200mm WR favors longer focal lengths; it does its best work around the 100mm range and the closer to the minimum working distance the better. This reviewer did not have access to another lens with the same range so unfortunately all of the comparison with other lenses is at the slightly unflattering 50mm end. However, the reader is able to see the worst case scenario this way. Shots throughout the range of the lens and at different working distances are also included, allowing for some comparison of the 50-200mm and itself.

Regarding the images in the comparison, first this reviewer must apologize, for it was not possible to get enough light while shooting the test subject (a sheet of music) at all distances and aperture settings. In the case of the longest shots, use of the flash could not be avoided, resulting in some strange coloring. Hopefully the sharpness can still be discerned from the samples. The test subject (the sheet of music) was shot at various distances to keep the subject at a constant size. All samples shot at 50mm were shot at the minimum working distance for this lens, just around 35 inches. A slight alteration was needed for the 18-55mm to keep the subject the same size, but not much. Then, all of the samples at 95mm were shot at a working distance of 69 inches and the shots at 200mm at around 127 inches. The images in the comparison control are crops that include everything from the point focused on to the very edge of the photo and including a corner.

As can be seen in the samples, 50mm is not the best length for this lens. At the minimum working distance, around 35 inches, and the 50mm focal length, sharpness falls off pretty quickly as you move away from the point of focus at bigger apertures, and does not start looking better till around f11. The FA 50mm is much sharper right from 4.0 and the 18-55 is also better than the 50-200mm from f5.6.

However, from near 100mm the DA 50-200mm WR starts to look great; it is sharp almost all the way to the edges even at the largest aperture possible at that focal length (4.5), and it starts to look super around f8. Below are a couple outdoor shots highlighting what this lens can do in this range.

These are crops. The complete images can be viewed in the 50-200mm WR sample images

At around the minimum working distance and 100mm to 200mm it is very sharp at almost any aperture setting, which can be seen in the samples labeled with @ 35in.

Though this lens is not very fast (the largest aperture possible is f4.0), the Bokeh (out of focus or blurred background) is smooth and pleasant, throughout its range. There are more shots in the sample photos, linked below the one shown here, showing Bokeh at different focal lengths and the apertures (see the Rhino and the Vulture).

As with the non-WR version, this lens contains Pentax's Extra-low Dispersion (ED) glass lens element to reduce chromatic aberration and it works pretty well, except in shorter focal lengths combined with wide aperture settings. At longer focal lengths, even at the widest aperture settings, there is not enough CA to be noticed without scrutinizing the photo at 1:1 or closer, and then mainly away from the point of focus. This can be seen in the the complete Penguin sample and in photos DA_50-200_@_200mm_@35in_f5.6_crop.jpg and DA_50-200_@_200mm_@35in_f16_crop.jpg from the Sharpness test samples. Overall, handling of aberration, by the 50-200 WR, is quite acceptable.

This is a crop. The complete images can be viewed in the 50-200mm WR sample images

This lens exhibits noticable light fall-off, or vignetting, at larger apertures, especially at longer focal lengths. However, at the 50mm end it is not bad at all from around f5.6.

SMC lenses have coating to help cut lens flare and it seems to work pretty well when not pointed directly at a light source, however lens flare does still occur. Besides making nice cascading hexagons, a fair amount of contrast can also be lost due to lens flare when it is present.

This is a crop. The complete image can be viewed in the 50-200mm WR sample images

As with sharpness, when it comes to color, this lens cannot quite compete with something like the DA 12-24 or 16-45mm , though it does a pretty good job. For the review, only the lenses used in the sharpness test were test for color, but when similar shots were compared between shots from this lens and the pricier lenses mentioned, the 50-200 WR lost out. Among the lenses test against it for sharpness (DA 18-55 WR and the FA 50mm f1.4) it holds its own pretty well.

Where it cannot match the FA 50mm in sharpness, it makes up for in color, beating it through all aperture settings at 50mm, and though it mostly looses to the DA 18-55mm WR, the DA 50-200mm WR finally comes around at f16 and looks almost exactly the same as the DA 18-55 WR*.

* The DA 18-55mm WR shots in the comparison control are very close to the actual color of the car and buildings behind it.

Next: Handling and Construction 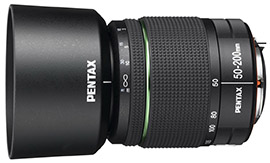