Pentax took the photographic world by surprise in 1997 with the launch of its first Limited lens, the FA 43mm F1.9. This was 20 years ago, at a time when film camera's were still the norm and digital cameras were a rare novelty (Nikon's D1 DSLR was still two years in the future). It was also an era of plastic zoom lenses, many carrying with them a feeling of cheap quality.

The FA 43mm was a little revolution at the time: a minuscule, full-metal bodied prime lens with an uncommon focal length and superb image quality. Joined a few years later by the 31mm and 77mm to complete the trio of FA Limited (often called the Three Amigos or Three Princesses), the 43mm was created by legendary lens designer Jun Hirakawa. Its rendering and optical qualities are often numbered among the best on the market even today.

43mm is the most "normal" focal length there is, matching exactly the diagonal of a full frame sensor. As such, it is a versatile lens suited for varied uses. On APS-C, the field of view is still relatively wide, more so than the ubiquitous 50mm. With its pancake format, it is easy to carry everywhere. Its fast aperture make it useful in low light situations.

At launch, the FA 43mm represented a mix of vintage and modern with its metal body, aperture ring and solid construction. Its small size is reminiscent of the efforts put into the M line of Pentax lenses, whose main objective was to be smaller and just as good as the K line.

We have already tested the 43mm in the past. However, with the advent of the full frame K-1 and with the dramatic increase in APS-C resolution in recent years, it is time to put the lens through its paces again.

The FA 43mm Limited is one of the most popular lenses in our user database, with an average rating of 9.48/10. Can it hold its own on modern camera bodies? Does it deserve its stellar reputation? Read our review to find out!

Next: Design philosophy of the FA Limited lenses

Ready to get your SMC Pentax-FA 43mm F1.9 Limited? Click below to place an order or check current pricing. 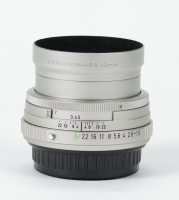