In 1999, two years after the launch of its first Limited, the FA 43mm, Pentax did it again, releasing another compact, high-quality prime lens with unusual characteristics and top performances. This lens was the FA 77mm F1.8 Limited.

The lens became an instant classic. Offering a fast aperture in a particularly small body (especially for a short tele), the all-metal 77mm is part of the trio of FA Limited primes, alongside the FA 31mm and FA 43mm. Often referred to as the Three Princesses or the Three Amigos, these lenses have often been numbered among the best lenses ever produced. 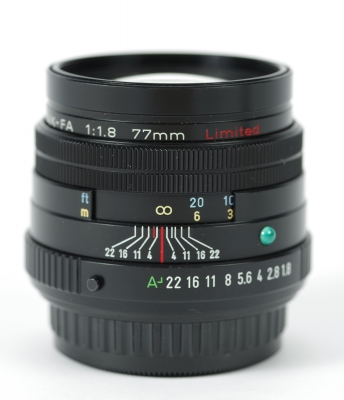 Even today, some 18 years after its release, the 77mm is in a class of its own. It was voted the best Pentax lens ever made in 2014. Ideally suited for portraits, the lens has gathered quite a following, and carries an amazing rating of 9.73 in our users database.

Like the two other FA Limited lenses, the 77mm sports a small metal body, a built-in sliding hood, an aperture ring and depth of field scale. Its solid construction compares well with older manual lenses and is leagues ahead of its plastic contemporaries. The 77mm is often compared to the ubiquitous 85mm portrait lens. Many of the latter are F1.4 instead of F1.8, but the 77mm has an obvious size advantage. It is, for instance, 77% of the length of the Sigma 85mm ART, while being only 25% of its weight.

How does this translate in real world photography and in the studio? In this review, we will try to determine if the FA 77mm is worthy of its impressive reputation.

Next: Design Philosophy of the FA Limited Lenses

Ready to get your SMC Pentax-FA 77mm F1.8 Limited? Click below to place an order or check current pricing. 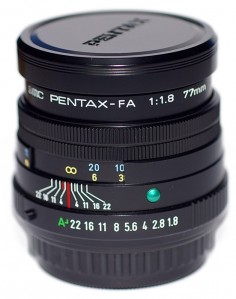