There are cheaper alternatives out there from various manufacturers, including Fotodiox.  Just be sure to get an adapter with an aperture ring if you want to use Pentax lenses without one and you should be in good shape. 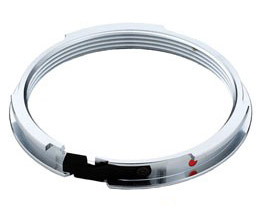 In order to use screw mount lenses a Pentax Mount Adapter K is required. Third party copies exist, but we recommend the original, which works flawlessly and allows the lens to focus to infinity.

It can be a bit fiddly to install the adapter. It is easiest to screw it onto the lens and then bayonet the lens with adapter in place as was it a K-mount lens. The adapter will lock in place and be flush with the mount of the Novoflex.

When un-mounting, the lens must be screwed out leaving the adapter in place ready for the next lens to be screwed in.

Some users affix Pentax K to M42 adapters permanently to their lenses so that you can bayonet them on and off. In order for this to work the black locking spring (see photo to the right) must be removed. 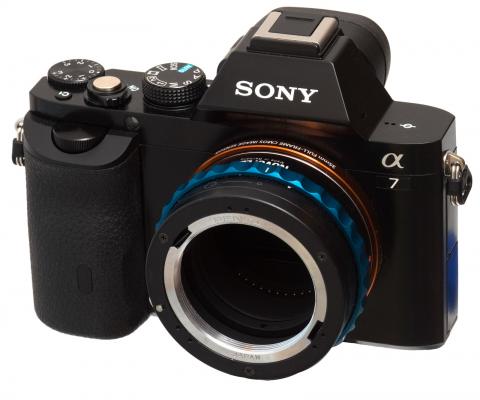 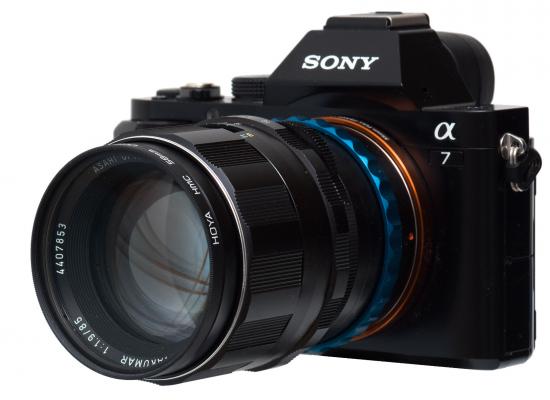 The physical set up works flawlessly. The downside is the loss of all automatic lens functions since there is no coupling between the camera and the lens at all.

There is no support for auto-diaphragm - the aperture remains closed down to the set value at all times. The good news is that the Sony's viewfinder adjusts gain automatically (so does the LCD monitor) so that the viewfinder (or live view) image remains as bright as had the lens been opened up fully between shots. Except at night in poor light the lack of auto-diaphragm isn't a big deal for composing the shot. The problem is the effect on focusing as we cover below.

This is easy to cover: There is none no matter what lens is used.

When it comes to focusing a Pentax lens on the Sony one feels set back about 50 years in technology due to the lack of auto-diaphragm. In order to focus with any degree of accuracy the aperture must be opened up manually to its fully open position. Then when focus has been achieved it must be stopped down manually again to the desired value and the shot taken.

Focusing at the shooting aperture yields poor results since the large depth of field basically makes focus peaking indicate that everything is in focus.

Shooting subjects in motion becomes challenging due to this cumbersome process. The best is to resort to the old technique of pre-focusing at the spot where the subject is expected to show up, then wait patiently for this to happen and take the shot in the right moment. Tracking focus manually at shooting aperture is not a viable option in practice.

Av mode is available (marked "A" on the mode dial) - the photographer sets the desired aperture and the camera sets the matching shutter speed. This works very conveniently, even more so due to the dedicated EV compensation dial on the top plate.

Manual exposure mode can be used as well, of course. This mode is particularly useful for night photography. During the day Av mode and the EV compensation of up to three steps works great.

Due to the lack of coupling between lens and camera, the camera cannot determine which aperture is being used and consequently there is no information about the F-stop in the EXIF metadata (or in the viewfinder/on the live view monitor). We have perhaps become spoiled by the modern cameras and their recording of all shooting parameters in the EXIF information including lens type and focal length, but pairing the Sony with Pentax glass means that we're back to taking written notes in the field about the settings and lenses used even with F and FA lenses.

If the lens you use has no aperture ring you won't be able to determine which aperture you shoot with (unless you shoot wide open or at the smallest aperture available). The Novoflex adapter has no click-stops or F-stop marks on its aperture ring. However, Pentax full-frame lenses without an aperture ring are just four in number (D FA 100mm Macro WR and three FA J zoom lenses) so this is only an issue if you own those lenses.

Ready to get your Sony A7 with Pentax Full-frame Glass? Click below to place an order or check current pricing.