The camera Clip Adapter is an interesting accessory. It is rare to see manufacturers building equipment meant to accommodate their competitor’s gear. 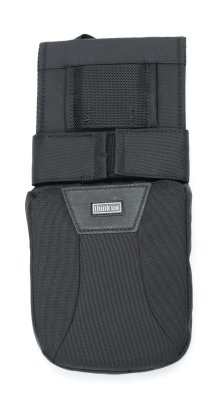 Using a pad such as this one presents a few advantages. The first, at least in Peak Design’s case, is that it straightens the orientation of the Clip. Worn on a regular belt, the Capture Clip must be oriented vertically, and the camera is inserted sideways. Using the pad flips the orientation to a more natural one.

Another advantage is to distribute the weight of the camera and create a rigid surface on which the lens can rest. This is particularly useful with longer and heavier lenses.

The Clip Adapter is made of two sections: a thinner top section where the belt and Clip attach, and a thicker, padded lower section to bear the weight of the lens. 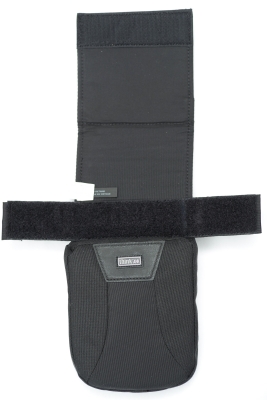 Attaching the Clip Adapter to the belt is easy but uses a different system than the other modular accessories. Instead of lifting a belt loop on the back, the user removes two small Velcro flaps at the front then lifts the whole top section. Sliding the Clip Adapter over the buckle of the Pro Belt is not possible.

The “holder” part of the accessory is located at the top. Made of thick and stiff fabric, it can accommodate Clips in both vertical and horizontal orientations. Spider’s products are intended to attach vertically, while Peak Design’s Capture slide in horizontally.

As can be seen from the pictures above, the Clip Adapter is ideally suited to fit the version 2 of the Capture Clip. The stiff fabric offers good purchase for the Capture Clip, and the screws don’t risk damaging the material underneath.

The Clip Adapter is not quite as well-fitted for the version 3 of the Capture Clip, however. That version is narrower and, while it does fit, it requires compressing the fabric and squeezing everything before inserting the screws. Making the Clip section half an inch narrower would have helped for this. Once in place, it works as expected, at least.

Like most of the modular system accessories, Think Tank’s Clip Adapter illustrates that the company aims this line of products at professionals. While Peak Design’s equivalent Pad has shrunk in size in its last iteration, the Think Tank version is large and thickly padded. The padding is moderately useful for smaller cameras and lenses, but becomes a godsend with larger lenses.

For instance, wearing a K-1 with DA* 60-250mm would be nearly unthinkable with the Clip alone, but becomes possible and even quite comfortable with the Clip Adapter. The weight is still there but much better distributed on the hips thanks to the width of the pad. Pairing the Clip Adapter with the well-padded Pro Belt is ideal. The thick fabric and long padded section help in keeping the assembly straight with minimum torsion, contrary to what occurs when the Clip is worn on a regular belt (see pictures above).

It is good to see accessory manufacturers adapt their lineups to newer systems like camera clips. Think Tank should be commended for this. Their version of the “clip pad” is well made, inexpensive and better suited than the Peak Design version for larger equipment. Users only looking for a compact solution to straighten the orientation of their Clip might prefer to look elsewhere, but photographers looking for a sturdy adapter will be glad to have this option.

Apart from making the attachment band narrower to accept the Capture Clip V3, there is little to criticize here.

Next: R U Thirsty

Ready to get your Think Tank Modular Belt System? Click below to place an order or check current pricing. 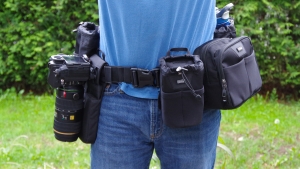