The Retrospective line has a great number of fans. Indeed, there’s a lot to like on the Retrospective 30 V2. If the discreet, non-photographic look of its beginnings isn’t as real nowadays, it’s only because the bag has become so well-known. Still, the bag succeeds at not looking like a camera bag. 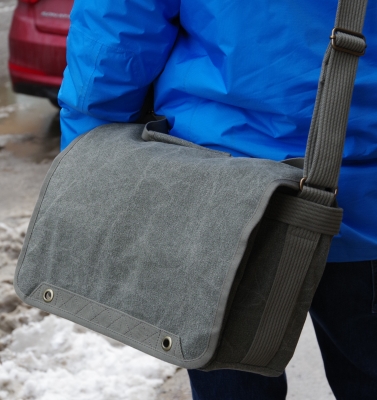 With five sizes to choose from, the Retrospective line aims at offering an option for every photographer. The smaller versions (Retrospective 5 and 7) will be best suited for APS-C or mirrorless shooters carrying maybe one extra lens. The 20 is best for long lenses mounted on camera, while the 10 is designed around a full-frame with a wide zoom mounted and a 70-200 F2.8 next to it. The 30, largest of the bunch, goes all in: it is able to carry, with ease, two camera bodies with lenses mounted, a long zoom unmounted, and a few extra items.

In addition to the features one would expect on a messenger bag, a few key elements make the Retrospective 30 V2 unique:

Each of these elements is part of the bag’s signature. They are also, incidentally, the most polarizing characteristics of the Retrospective. 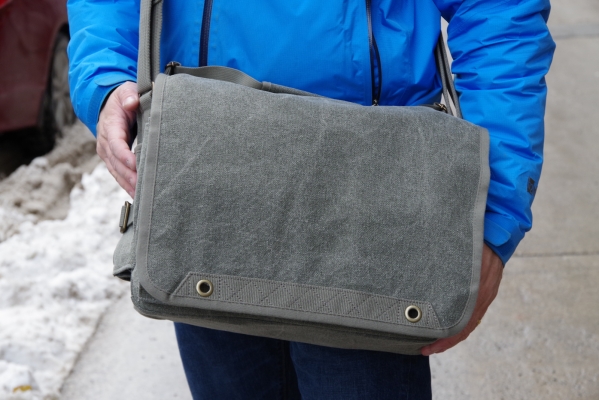 In particular, the flexible fabric will have its fans and its detractors. When worn on the hip, it certainly adds an element of comfort, wrapping around the wearer’s body. The canvas has a timeless quality and feels both durable and forgiving when worn out. People almost expect such canvas to be frayed at the edges… However, others will find the flexible shape sloppy (for lack of a better word). The camera section mostly keeps its shape even as the bag bends, but not completely. This means that objects can snag when inserting and removing them, which isn’t as likely with a more rigid bag. The back of the bag is marginally stiffer, so inserting a tablet will be easier. Placing long objects to the front of the main compartment won’t be as fluid. In any case, after using rigid bags for a long time, the Retrospective 30’s flexible shape takes some time getting used to. 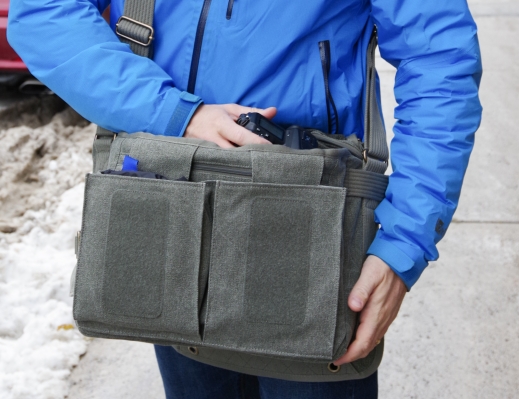 The dividers are interesting because they conform to the flexible nature of the bag, and are meant to bend and curve. As usual with Think Tank, the amount of dividers provided is more than enough for general use. We only regret that these dividers follow the current market trend and do not attach to one another. This severely limits the number of possible configurations inside the bag. We appreciate the smooth fabric used: it is easy to clean and does not catch on anything. We simply wish there was a way to create smaller sections inside the bag. Note that, by removing all dividers including those at the bottom, the Retrospective transforms into a regular messenger bag and can be used for a variety of purposes. 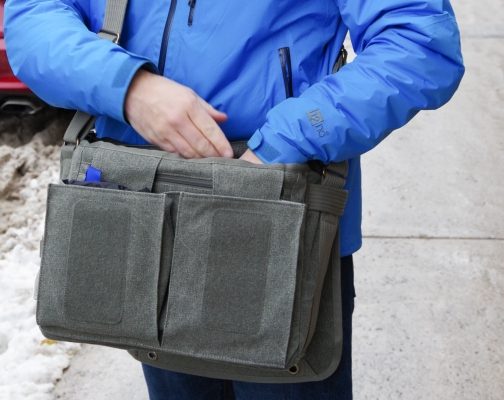 On the other hand, the Retrospective 30 V2 must be reviewed by understanding to whom it caters. It’s not a bag meant to carry a large number of items, but to carry a few large items. As such, it’s not surprising that the dividers do not invite a lot of experimentation with various configurations. This bag is well suited for anyone carrying two camera bodies or for anyone carrying large lenses and, say, a few studio lights or strobes. A user carrying the “holy trinity” (15-30mm F2.8, 24-70 F2.8 and 70-200mm F2.8) will enjoy the Retrospective 30’s size, shape and wide opening.

The straps are among the best elements of the Retrospective 30 V2. The shoulder strap, in particular, follows the Think Tank tradition by offering a high level of comfort. The hand strap is a departure from the usual: it attaches to the sides of the bag instead of the top flap, it can be completely removed and can be used even if the top flap is opened. Of course, loading the bag to the brim will make it heavy, impacting comfort.

Despite the use of cotton canvas, the Retrospective 30 V2 is extremely rugged, almost burly in appearance. It includes a few noteworthy elements on the outside.

As usual, Think Tank thought about travelers and included a luggage pass-through. The plated brass hardware contribute to the classic look and appear durable. The two front pockets expand by quite a lot as needed, but retract close to the main compartment when empty, a nice perk.

The water bottle pouch is well positioned. It can even be used as a temporary lens pouch, by wrapping one of the extra dividers inside and using a small padded flap that’s hidden at the bottom of this pouch and which covers the bottom when flipped down. It’s the first time we see this, and it’s a very good idea.

Although it’s not their purpose, the pockets hiding the silencers when not in use can serve as small storage compartments, adding yet another way to carry small items. Since the silencers are sewn to the top flap, they can’t be misplaced or lost.

One missing element is a way to carry a tripod. A compact travel tripod can easily be placed inside the bag, over the camera gear, or between the zippered cover and the top flap. However, there’s no provision for larger tripods. We feel that there probably could have been a way to modify the top flap and cover configuration and use this section to hold a regular-size tripod. As it is, it’s possible to slip one or two legs or a tripod under the top flap and the rest above, but it’s not ideal, and not particularly stable. 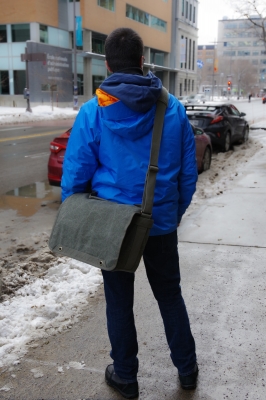 The Retrospective 30 V2 certainly gets a lot of things right. The rugged look is subjectively pleasing, with its cotton canvas and brass hardware. The bag is capacious, protects the gear well and includes some nifty elements. Its strap is among the best on the market.

A few things leave us wondering, namely the way the front flaps prevent easy access to the zippered pocket and the limited configuration possibilities since the dividers don’t attach to one another. The lack of a tripod carry solution is also a letdown. The flexible shape is a love it or hate it affair; in any case having the bag wrap around the wearer’s body improves comfort.

Ready to get your Think Tank Retrospective 30 V2? Click below to place an order or check current pricing. 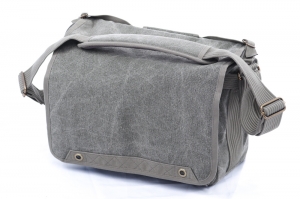