By now we've thrown around the terms "rectilinear" and "fisheye" quite a bit. In the remote chance you are still doing the dandruff rake, we've dedicated this page to explaining what it all really means.

But first, before we get to those two terms, it would help to start with understanding distortion, as it plays a very critical role in such fields of view. The two primary types of this aberration are barrel and pincushion and here's what they actually look like in practice:

Barrel distortion is aptly named because its "straight" lines (either horizontal or vertical) bend in such a manner that they give off the impression they are "bulging" towards you, similar to the way a barrel (or other rotund objects) would look from the side. Notice how the lines through the very center of the image are straight yet increasingly curve the further they are from the center.

Barrel distortion is most prevalent in wide angle lenses because the field of view is wider than the size of the image sensor, causing the edges to be "squeezed  in," and hence why the effect is much more pronounced on super wide focal lengths. Also—and this is how it particularly pertains to this review—fisheye's are the kings of barrel distortion. In other words, it's their purposeful implementation of it through an optical design that intentionally distorts in this manner which allows for such a mind-bendingly wide field of view.

Due to the extreme nature of the wide angle lenses at the crux of this review, the barrel variety will be the dominant form no matter the lens and we have an entire page dedicated to example comparisons.

We started this page with these two terms, which you may find to still be somewhat obtuse. Coming back to them, we shift our attention from distortion to projection.

Rectilinear, which is just a fancy Latin-derived word for "straight lines," dominates the overwhelming majority of photographic lenses. That is how they are designed to project the world in front of them onto the sensor (or film) to the rear. Optical imperfections aside, they nonetheless intend to project straight lines as straight. Where fisheye lenses differ is that they intentionally exacerbate barrel distortion in order to significantly increase the field of view projected onto the sensor. While we have a plethora of examples awaiting you on the following page, here is a quick comparison of an example scene as shot by one of the rectilinear lenses and another from one of our fisheye's:

The easiest way we can think to explain the difference is cartography, as it's something we are all familiar with and have been taught in school, even if we never realized it before.

If you make your way to Wikipedia's listing of map projections, you'll notice there's over 50 recognized ways to project the earth (a round, three-dimensional object) onto a flat, two-dimensional surface (a piece of paper, computer screen, etc.). While the sheer quantity and differences between them is well beyond the scope of this explanation, two of the most common projections that we have all encountered directly apply: the Mercator and the Robinson Projections, respectively:

As you can see in the Mercator, with all the latitude and longitude lines being straight, they distort the scale and appearance of things the further you get latitudinally (vertically) from the image's center, which we know in the context of the globe is the equator and Prime Meridian.

The one caveat though is that regarding non-fisheye ultra wide angle lenses, the Mercator projection is a better comparison when the lines of longitude mimic the behavior of the latitudes not being equidistant. The below animation should demonstrate how not only is the image skewed from north to south, but as you make it to the fringes of the equatorial belt as well:

Going back to the Mercator/Robinson juxtaposition, the latter preserves inherent shape and scale of objects regardless of where they are located within the "frame" (i.e. map). The compromise, however, is the obvious curvature that results from trying to mimic a three dimensional curved object onto a flat plane. Both of which—the shape preservation and the compromise—are very similar to how fisheye lenses react.

Arguably the most classic example educators default to is the nation of Greenland. In the Mercator (and especially the skewed one we modified directly above), it is akin to the size of the continent of Africa. What may surprise you is that with an area of 836,300 square miles (2.17 million km²), it pales in comparison to the latter's 11.67 million square miles (30.22 million km²)! At a magnitude of almost fifteen times smaller, Greenland is much closer in size to the island of Madagascar and is in fact smaller than Africa's two largest countries (Algeria and the Democratic Republic of the Congo): 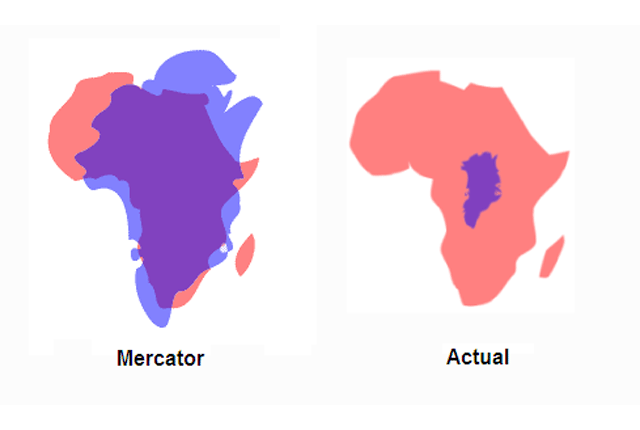 Originally designed to imitate the view each eye of a fish is understood to have looking through water (and hence the name), fisheye lenses were borne of scientific curiosity and study. Quickly they garnered the semi-official moniker of "full sky lenses" because of how frequently they were deployed in astrophotography.

With how ubiquitous that term is these days—fisheye—that doesn't mean though that all such lenses are one and the same. While not as dramatic a departure as "Mercator vs Robinson," fisheyes squeeze more into the frame using slightly nuanced projections as well. And the two fisheye lenses concerning this review are indeed different.

Technically, the Pentax zoom is an "Equisolid Angle" projection whereas the Rokinon prime is a "Stereographic." Where the former prioritizes the relative surface area of an object—and experiences exaggerated compression and distortion because of it—the latter maintains greater integrity of shape even as one approaches the fringes of the frame.

Compliments of Wikipedia Commons, here is an excellent side-by-side comparison that shows the difference between the two. Click on it to view a slightly larger version:

We'll revisit this scene later in the review (including how the two rectilinear lenses look), however this was one of the clearest examples we found to show an obvious difference between the two in their attempt to squeeze more into the frame. Pay particular attention to the light pole in the top-right corner, whose 100% crops are included underneath the scene. Additionally, we've included the above computed-generated comparison with the same corners highlighted so you can see how that part is being distorted: 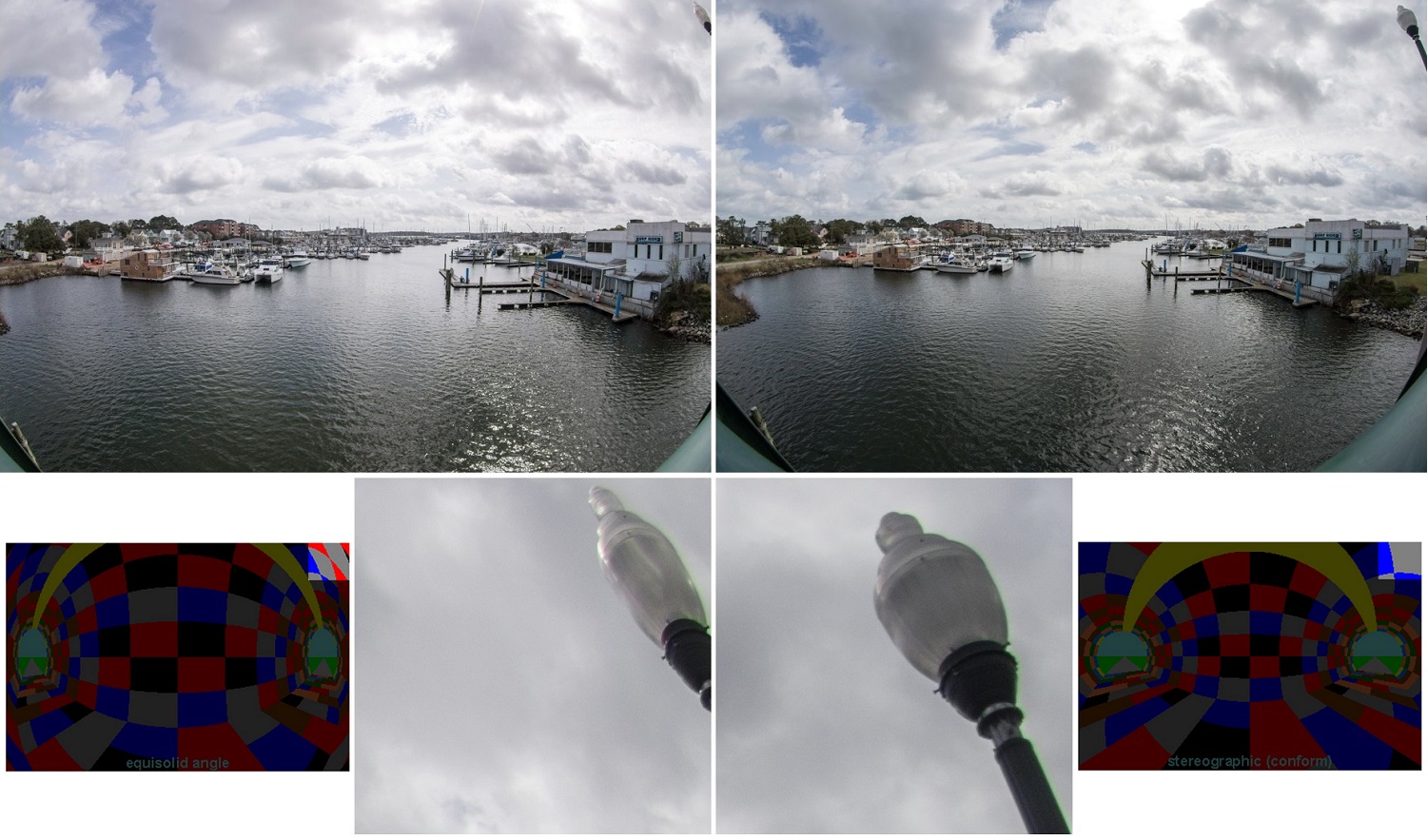 Also known as equal-area projection, lenses of the equisolid persuasion are the most frequent type of fisheye lenses made for consumer photography. This projection also lends itself to more compact lens designs, which our many product photos on the Construction and Handling page corroborate despite the Pentax lens being a zoom and sharing the same maximum aperture as the other fisheye.

True stereographic fisheye lenses comprise the rarest version lens designers opt for (with the exception being their widespread use in video micro-cameras), which is certainly a shame because of how much "cleaner" and even the distortion is across the entire frame.

So why is all this important? Simply because across the next two pages we have dedicated ourselves to as many situations as we can think of to directly compare these four lenses—with two per projection type—and we felt it necessary to understand the "why" and "how" before being flooded with the "what."

And there's a lot of the "what" awaiting you on the next page with literally two dozen field of view comparisons!

Next: Field of View Comparison

Ready to get your Rokinon 8mm vs. 10mm vs. Sigma 8-16mm vs. Pentax 10-17mm Ultra-wide Showdown? Click below to place an order or check current pricing. 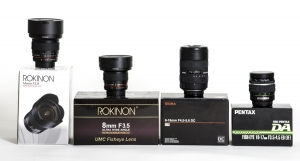